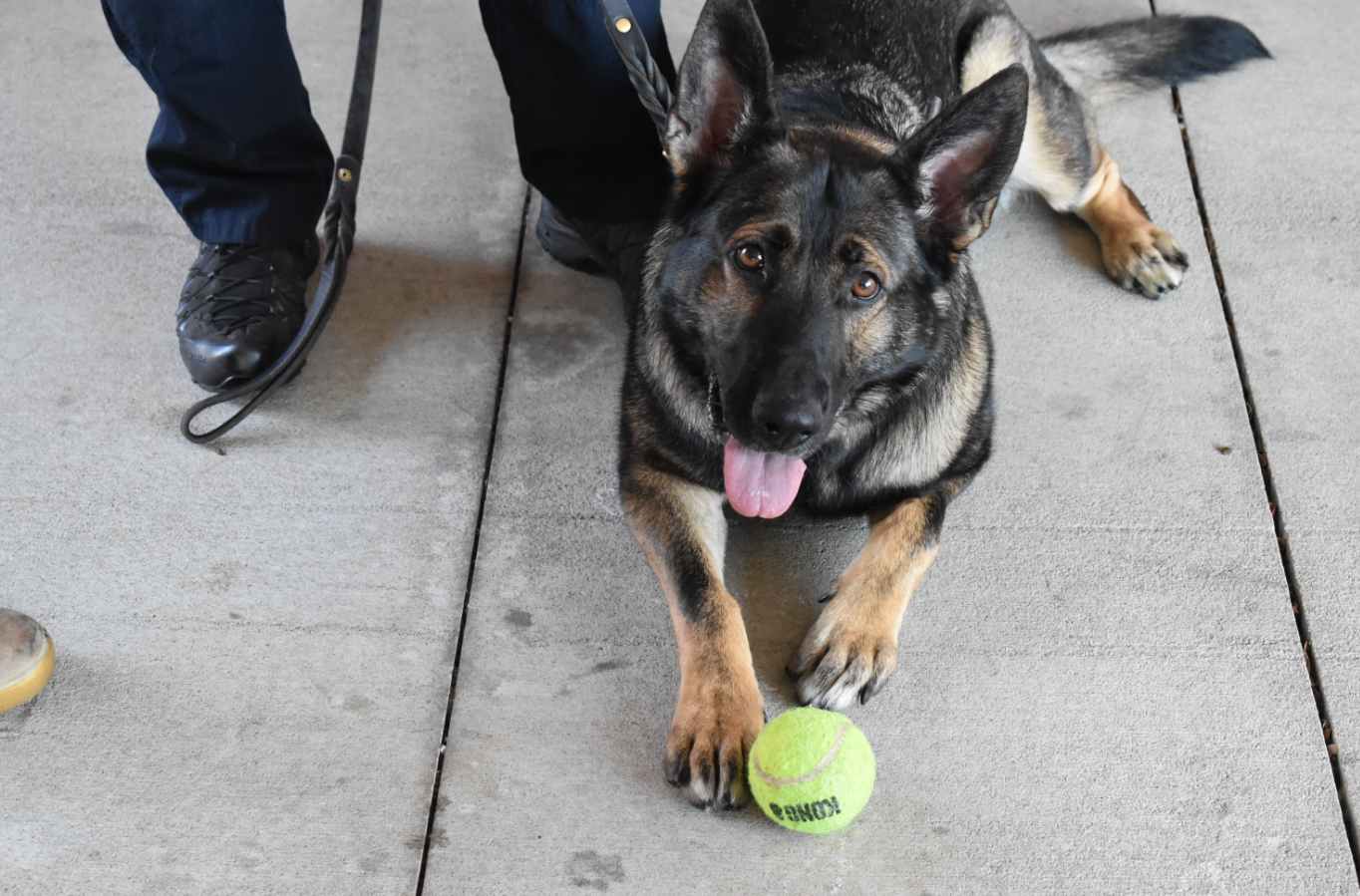 The K-9 unit allows our department to deter crime by adding the following elements:

Our program has grown extensively through the years and continues to provide an important service in the apprehension of criminals through the use of trained canines and their law enforcement handlers. The Department has utilized canines to assist officers with law enforcement and public relations activities. The Department currently has four canine teams that are used for narcotics detection, tracking, and patrol work.

All canine teams go through extensive training before deployment to the field. This training is ongoing as the K-9 Unit gathers every week to work on skills that will keep the teams proficient. The K-9 Unit also participates in dozens of public demonstrations throughout the community each year. To request a canine demonstration, contact the Myrtle Beach Police Department at (843) 918-1382 and ask to speak to the K-9 Unit Supervisor.

Visit the K9 Unit Facebook page at this link here.

PFC. Hyde was raised in Long Island, NY, Suffolk County area. At the beginning of his Junior year of High School his family relocated to Myrtle Beach, SC where he went on to graduate Socastee High School. Pfc. Hyde began his career as with the Myrtle Beach Police Department as a Community Service Officer, a short time after graduating High School. Hyde continued to work with the CSOs until his 21st Birthday, where he earned a position as a police officer. Following his graduation of the South Carolina Criminal Justice Academy Hyde began his career as many do with the Patrol Division. He spent 1 and a half years on night time patrol until moving to the Waterfront Unit for nearly a year. Hyde then transitioned to the Traffic Unit where he worked as a night time traffic officer for 4 years. After serving various positions throughout the Department Hyde was Selected for the K-9 Unit in March of 2018. PFC. Hyde was assigned K-9 Kelly. Hyde and Kelly began their journey together at Costume Canine Unlimited for a 4 week single purpose handler course.

PFC. Shon McCluskey is originally from Pittsburgh, Pennsylvania and received a Bachelor’s Degree in Criminal Justice from Indiana University of Pennsylvania in 1996.  PFC. McCluskey moved to the Myrtle Beach area upon being hired with the Myrtle Beach Police Dept. in 1997.  PFC. McCluskey has been with the department for over 22 years, and spent 15 of those years working in the Traffic Division.  PFC. McCluskey accomplished certifications as an Accident Reconstructionist, Instructor in Standardized Field Sobriety Testing, and Instructor in Speed Measurement Device. PFC. McCluskey was nominated and awarded as Police Officer of the Year for 2015. In August of 2016, PFC McCluskey was accepted into the K-9 Unit to handle a 4-year-old Belgian Malinois named Daisy.  PFC. McCluskey and K-9 Daisy attended a K-9 Handler Course, and in October of 2016 hit the road as a team.

K-9 Daisy is trained and certified in drug detection, article searches, and tracking.

PFC. Tyler Struckus is originally from a town in Southern New Jersey. In January 2016, Tyler joined the Myrtle Beach Police Department. Before being selected for the K9 Unit, Tyler had been assigned to the Patrol Division, Waterfront Division, and the Power Shift. In April 2019, Tyler was selected to be a K9 Handler for his K9 partner Yep. Tyler and K9 Yep completed the Full Service K9 Handler Course and graduated from Custom Canine Unlimited on August 02, 2019.

PFC. Turner was born in North Myrtle Beach, SC and grew up in Loris, SC. He was hired by the Myrtle Beach Police Department in March of 2014. PFC. Turner started his career on the road as a patrol officer.  His first 6 months were on daytime patrol, then he spent 2 years on night time waterfront and then over a year on the power shift. PFC. Turner became one of the departments first certified Police Decoys in 2017 and started assisting the K-9 unit in training. PFC Turner has been on the MBPD SWAT team since 2017 and has recently become a Field Training Officer. In the Fall of 2018 PFC Turner was selected as a K9 Handler. He was paired with his partner Bek and they spent 6 weeks in Maysville, GA training to become a Full Service Patrol K9 team.

K-9 Bek is a 4-year-old Belgian Malinois. The K-9 team is trained and certified in drug detection, article searches, tracking, criminal apprehension and handler protection. Since they have been a K-9 team, PFC. Turner and K-9 Bek have assisted with multiple apprehensions of violent felons and were awarded the best K-9 Patrol Team at the 2019 Custom Canine Unlimited K-9 workshop.

PFC. Cox was born and raised in Myrtle Beach, SC.  He was hired by the Myrtle Beach Police Department in September of 2011. Before being selected to be a K9 Handler, PFC Cox was a patrol officer before moving to the Street Crimes Unit and is currently a Field Training Officer. PFC. Cox has been on the SWAT Team since 2016.