Date of Incident:  Monday, March 7, 1949
Weapon Used: Handgun; .38 caliber
Suspect Info: Shot and wounded
Officer Scarborugh was shot and killed while he and his partner were attempting to transport a prisoner. Scarborugh was a U.S. Army veteran and was survived by his wife, two sons, two daughters, three grandchildren and two sisters.

Cause of Death: Gunfire
Date of Incident: Sunday, December 29, 2002
Weapon Used: Handgun; .45 caliber
Suspect Info: Sentenced to death
Officer Joseph McGarry was shot and killed while he and his partner investigated a suspicious person on North King Highway at 0030 hours. Officer McGarry had been employed with the Myrtle Beach Police Department for four years, and was assigned to the Street Crimes Unit. 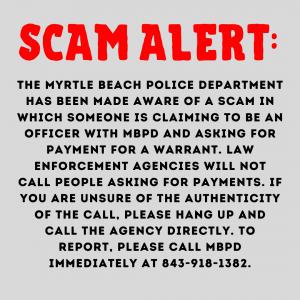